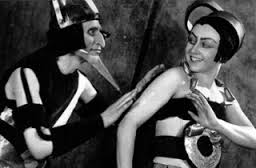 The year is 1999; the date is December 31; time is running out for the alien beings of Planet Operalia, aboard the spaceship Susannah 2000. Mylar and Latex must find another world with a sexually compatible, musical species in order to reproduce and survive. Drawn telepathically to the strong emotions and catchy tunes coming from Planet Earth, the ship veers too near to the planet’s atmosphere, and succumbs to the Y2K bug. When the Operalians crash-land on Earth, they find that human relationships are even more complicated than they had thought…