THE EVE OF WATERLOO (2014), written for heldentenor, features Lord Byron’s poem about the events of the night before the battle of Quatre Bras, which was fought near Brussels, on June 16, 1815, and was the preliminary of the great battle of Waterloo. 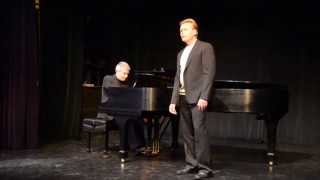 The Eve of Waterloo for Heldentenor

The score is available for purchase at Swirly Music.

The piece was commissioned to premiere in June 2015 at the concert “The music of Liam Wade and Richard Wagner in recital” at the German Residence, San Francisco, presented by the Wagner Society of Northern California and the Consul General of the Federal Republic of Germany.

This is a gallery of candid photos taken at the Wagner Society Party held at the German Residence in San Francisco, CA.